For most of the last 20 years my family has had a TV in our kitchen. It was the cheapest 19-inch flat panel I could find at the time – a Sharp 720p model – and we connected it to our cable connection and a Tivoli One speaker for better sound. Worked great – no complaints. But when Amazon asked if I wanted to try swapping out that old gear for something a little more modern, like an Amazon Echo Show 15 with its latest Fire TV update, I thought why not? Three weeks into the experiment, here’s how it’s going.

You will need a mount…

If you’re also planning on doing the whole kitchen TV replacement thing, be prepared to spend a little more than the $250 price tag of an Echo Show 15. Out of the box, it will only mount to a flat wall surface. . If you’re lucky enough to have a kitchen with a piece of blank wall available that’s also visible from multiple angles, you’ve just saved yourself some money. But I wasn’t so lucky and had to ask Amazon representatives for help. They kindly sent a Sanus Tilt Support ($32), which allowed me to place the Echo Show on the countertop where the TV used to be.

The Tilt Stand is a decent budget option, offering the ability to tilt the screen from upright to tilted back. Turn the entire unit in whichever direction makes sense and you’re good to go. However, if I decided to make the Echo Show a permanent addition (and I still can), I’d spend a little more and choose one of several under-counter mounts that can suspend the Echo Show while still giving it complete freedom of movement, including angle. , tilt, and pan (when not in Fire TV mode, the Echo Show 15 also works in portrait orientation).

One thing to keep in mind if you decide to wall-mount: the viewing angles on LCD panels aren’t the best. As far as these devices go, the Echo Show really is better than most. But if you can’t find a wall spot that offers a more or less perpendicular viewing angle from high-traffic kitchen spots, you’ll want a bracket with adjustable angle and tilt.

…and a remote control

The other thing you’ll need if you want the Fire TV experience is a Fire TV remote. I was able to use an existing second-gen Fire TV remote, but Amazon recommends (as do I) the latest 3rd Gen Alexa Voice Remote for Fire TV ($30) or Voice Remote Pro.

Why? The Echo Show 15 is a touchscreen device, but the Fire TV interface isn’t designed for touchscreens, so there’s a limit to what you can do with just touch. Navigating the first-level home screen, with its large tiles for shows, movies, and third-party apps, is easy enough, but it gets a lot harder once you get into the apps themselves. If you don’t have a remote, the Echo Show takes pity on you by providing an on-screen virtual remote. But, trust me, this thing is a pain to use. Also, if this is a TV replacement, why would you want to go to it every time you want to change something? A physical remote is required.

Pro Tip: You can save $30 and use the Fire TV app on your phone as a remote.

Wait, what about Alexa?

As an Echo product, Amazon’s voice assistant is front and center as the main way to interact with the Echo Show 15. Before the introduction of the Fire TV experience, this made sense: all of the frame’s features can be easily controlled. by voice command. Alexa can help with Fire TV activities to some extent, too, but as with the touchscreen option, you quickly run into limitations.

Getting Alexa to launch your favorite app like Disney+ or Netflix is ​​a breeze, and you can even specify which show you want. Play, pause and volume control are equally accessible by voice. But the act of navigating the content – scrolling through the blocks and showing the descriptions – or any kind of in-app navigation is impossible. As long as you think of Alexa as a voice-controlled shortcut magic genie, you won’t be disappointed.

The Echo Show 15 offers a bright, crisp display that works well for just about any casual viewing you want to do. Newscasts, cooking shows, game shows, and reruns of your favorite sitcoms are perfectly suited for your device’s display.

Is its 1080p Full HD resolution also more than adequate when you consider how small it is and what about the missing HDR capability? Sure, HDR would be great, but since you can’t find this feature on any mainstream TV smaller than 32 inches, its absence isn’t a problem.

Ready to cut the cord?

With the addition of the Fire TV interface and a remote control, the Echo Show 15 looks a lot like a regular smart TV. Just make sure you’re prepared for the ways in which it’s not like a television. For example, with the exception of a Micro-USB port on the rear (which is strictly for use with an Ethernet adapter), there are no inputs or outputs of any kind.

Our Tivoli One speaker, which provided much better sound for the old Sharp TV, is now idle – there’s no analog output from the Echo Show. Our decoder also languishes – with no HDMI input, there’s no way to connect it – or any other device.

If you did 100% streaming this might not matter. After all, the Fire TV interface supports just about every streaming app you could ask for.

You can gather enough channel-specific apps to do this. I was able to add CNN, CTV and CBC apps, but that’s still a long way from all the channels I can normally access. Also, while the Fire TV interface does offer a live TV guide view, it doesn’t seem to be able to pull data from apps that require subscription authentication, such as CNN and CTV.

If you like getting your local TV stations for free over the air via an antenna, that becomes more difficult too. With no antenna input or built-in tuner, the only way to OTA the Echo Show is through an OTA receiver that supports Wi-Fi streaming and an available Fire TV app. There are several of them, including models from Tablo, SiliconDust, and AirTV, but you’ll need to factor that extra expense ($100-$200) into your calculations.

Oh, and one more thing: the Echo Show may be Fire TV savvy, but it’s not a true Fire TV device – you can’t stream or mirror the screen like a Fire TV Stick (at least, not without a crazy-complex solution , multi-step, and app-based) – and there’s still no support for cloud gaming services, including Amazon’s own Luna.

Does it replace the kitchen TV?

Despite its shortcomings as a real TV, I think the Echo Show 15 – once you add the remote and possibly a stand – works very well as a kitchen TV replacement. The Fire TV interface, while not quite as intuitive as an Apple TV or Roku, is still perfectly capable of giving you access to all your favorite subscription apps and free streaming, which for most people is probably all you’ll ever need.

The built-in speakers aren’t super powerful, and the sound quality is only average, but that goes for just about any small TV, too. You can’t connect the frame to a wired speaker, but Bluetooth is an option; therefore, you may already have a wireless speaker that works as well or better than a wired unit.

Plus, my family agrees: the Echo Show 15, with its matte-bezel styling, is far more attractive than our vintage Sharp from the mid-2000s.

A few more thoughts on the Echo Show 15

OK, the Echo Show 15 might replace a kitchen TV, but what’s it been like, overall, living with that smart screen in one of the busiest rooms in the house? I have some thoughts.

It can drive you crazy

One of the Echo Show 15’s main selling points is its always-on display that can show a collage of useful information panels like an Amazon Photos slideshow, smart home shortcuts (lighting, cameras, thermostats, etc.) and Alexa – Driven reminders for the family.

But the constantly changing and moving screen is distracting. I’m the type of person who freezes in place when a show or movie is playing (don’t even try to talk to me before hitting the mute or pause button); the Echo Show’s “show” exerts a powerful pull.

This camera is amazing 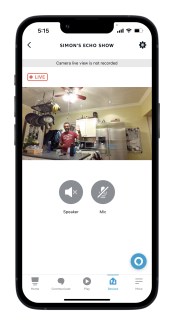 I’m still kind of bummed that you can only video chat with others who also own camera-equipped Echo devices or have the Alexa app on their phone or tablet, but I’m pretty impressed with the Echo Show’s built-in camera.

Our kitchen is reasonably well lit, but hardly what I’d call “bright,” and yet the camera image is at least as good as what I’m used to getting from the camera built into my 2021 MacBook Air. its ability to auto-follow and zoom to keep the current speaker in the frame works really well.

Due to its size and shape, the Echo Show 15 feels like a tablet – a feeling reinforced by its touch interface. I always wanted to use it as a tablet, starting with home screen widgets. This is especially true of Amazon Music, which teases you with song recommendations but doesn’t actually let you interact with the full Amazon Music app. Want to search for a specific song, playlist or album? You’ll need to get your phone out or try your luck asking Alexa.

Others have pointed out that Amazon’s Echo Show devices don’t really offer much beyond what screenless Echo devices can do, so this isn’t a new complaint. It’s just that on the super generous screen of the Echo Show 15, this limitation seems even more unfair. If Amazon gave this device the full Fire TV tablet treatment, it would be a lot more capable.

The Legend of Vox Machina season 2 review: Bigger and bolder

T-Mobile Gets Hacked Again: Is Un-Carrier Not Secure?